I've probably mentioned having a cat a few times in the IT thread. So here he is: 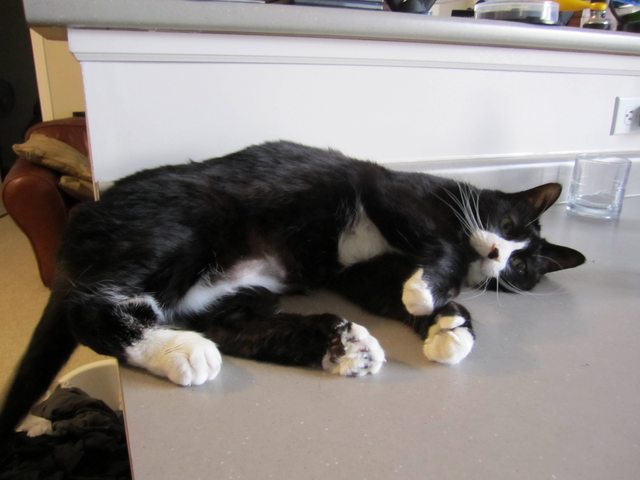 God, I love animals. Hate people, but animals are awesome. I'm especially into parrots. I've long dreamed of getting a greenwing or scarlet macaw, but I don't know if it'll ever happen. I did get an umbrella cockatoo though. Or rather, she got me. I was just in the pet store picking up food for something and I wandered over to the bird section to sight-see. This cockatoo, for lack of a better term, picked me. She shooed all the other birds away from me, and she bit anyone who tried to take her off of me. How could I say no? Best $2,500 I ever spent. Unfortunately the only pic I have on my computer is a tiny face shot I was using for an avatar a while back.

My kitty has six toes on his back feet. This is called polydactyl, although his breed is a domestic short hair (tuxedo pattern).

I have a dog called Sammy who's a Parsons Russel terrier and she's the best thing ever.

There is also a cat that lives in the house. He's a jerk.

I have a Red long stripped slider Turtle

Rifneno wrote:How could I say no? Best $2,500 I ever spent. Unfortunately the only pic I have on my computer is a tiny face shot I was using for an avatar a while back. 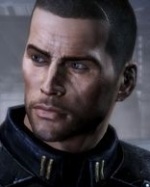 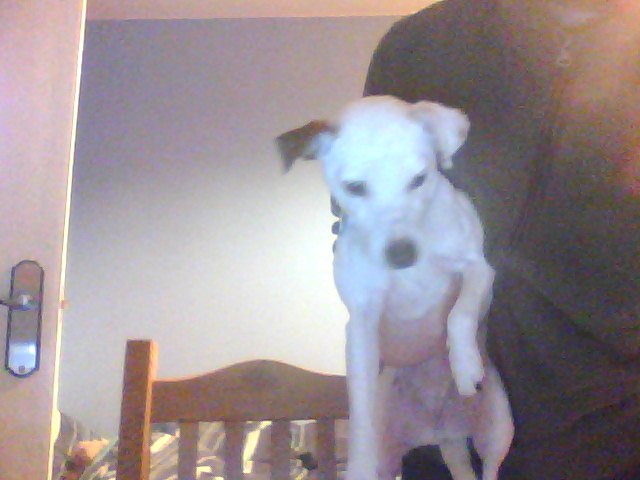 A dog by the name Nille. She is just the cutest thing and acts very much like a puppy despite being several years now. Also she seems to like me quite a lot, but that probably ties into the fact that I was the one who primarily took care of her right when we got her (I had vacation, the rest of the family did not). She is mix breed, but I cant remember mix of what.

Then we got two cats, Annie and Gustav. Annie is simply the most evil cat ever, always staring at you with an expression best described as that Grumpy Cat from memebase.

Gustav on the other hand is fat and...well...stupid. Seriously Gustav has quite a few times walked into a closed door or similar.
_________________
Heroes get Remembered, but Legends never Die.

I've got a dog and a cat. My dog is called Rufus, my cat Scipio.

Rufus is half-bernese mountain dog, 1/4 collie, and 1/4 german Shepherd. He's a friendly dog and likes playing with toys. He's not the smartest dog around, but he's cute and nice.

Scipio is a farm cat. Most of the time, he's not even home, but outside. He only comes home late in the evening. He's not the most cuddly cat around, and he's certainly not friendly. He keeps away from me most of the time, but for some reason, he absolutely loves strangers and always walks up to them, wanting to be petted.
_________________
"We make a living by what we get, but we make life by what we give"
-Winston Churchill

"People sleep peaceably in their beds at night only because rough men stand ready to do violence on their behalf."

Rifneno wrote:How could I say no? Best $2,500 I ever spent. Unfortunately the only pic I have on my computer is a tiny face shot I was using for an avatar a while back.

Hehe. We found a tortoise in the yard last year. Knew nothing about them, but we eventually identified it as a wood turtle. Cute little bugger. Obviously a pet because he didn't shell up even when picked up. We tried unsuccessfully to find his keeper, so we wound up taking care of him.

Depends on the breed. Most of them go for around $2,000. It wasn't so much that the cockatoo was cheaper as it was that I wasn't really ready. I had to borrow half the money, and I hate owing people. Whether or not I'll ever get one is more about its size than the cost though. Macaws are the largest, loudest, and strongest parrots. Those last two are a bigger concern than they seem at first glance. Their voices are made to carry over great distances in the rainforest treetops. A barking dog has nothing on a screeching macaw. As for the strength, they're nut eaters. And some nuts are hard. Some macaws can crack nuts that humans typically use sledgehammers to open. They can do some serious damage. Either to furniture and the like, or your hands if you're not careful.
_________________

I don’t have any pets right now as my last two dogs passed away a little while ago and my family and I have felt like getting a new pet just yet. They were two gorgeous Greyhounds, both of them racers that we brought when they were pups and then brought home when their racing days were over. 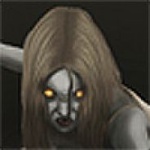 I know someone who has 7 cats and 2 dogs. Most of them are rescue cats.

A better pic of my pets!

Jona
(i can never get a picture of him, he hates cameras)
And Jon Snow AKA The Jarl of Whiterun Abraham Lincoln Vampire Slayer
(I can't find a picture of him either for some reason?? He's the nicest one out of all of them. Everyone else is insane.)
One Betta Female; Her name's Xena

And then there's the four feeder fish i got two-three years ago that my turtle decided to befriend and never eat (I had to give him away)
They're all the size of footballs now and collectively named Samson.
You can see some of Samson here while Bacardi(the turtle) tries to eat Shane through the tank.

I know someone who has 7 cats and 2 dogs. Most of them are rescue cats.

I myself owned 12 cats and 1 dog for a time. Had to get rid of most of them, since they made a mess of my house. I have 4 cats and 1 dog now.
_________________
Haunting a thread near you!
"Beneath this thread there is more than words. Beneath this thread there is an idea Mr. Priestly...and Ideas are Modproof!" -Ld 1449 HTL fourms
"You can fight like a krogan, run like a leopard, but you'll never be better than Commander Shepard." - Commander Shepard Song.
"Be ready, I wouldn't be surprised if this button summoned a Reaper."
Proud IT Theorist and Talimancer.
"I want more time" - Tali

Animals my family (me, aunt, uncle) have had:

-two cats, eventually given to my cousin and his wife, one has died and other is STILL alive and damn old!

-another budgie called 'Ruby', who may be alive... I forget and I don't live with my aunt and uncle any more

-Siberian Husky called "Shania", who sadly had to be put down a couple years ago :(!!!

-Alaskan Husky called "Sheena" who is awesome!! I miss her.


My boyfriend and I are definitely getting a cat at some point, and when we're more financially secure, at least one husky. I demand it!