Your Favorite Anime of all Time?

Re: Your Favorite Anime of all Time?

Tops for me is Cowboy Bebop. The action, comedy, music, voice acting, everything is so well done. It's just FUN!

I also enjoy Macross, (Robotech in general, but the Macross adaptation in particular). Though, to my great sorrow, I've never watched the actual original Macross series (rather hard to come by lately). If I had to put a finger on my favorite of these, I'd say Macross Plus.

Vampire Hunter D: Bloodlust is high on the list.

Re: Your Favorite Anime of all Time?

So, year's over, lots of animu has been watched, so I made a small Top 3 Chart for all the seasons: 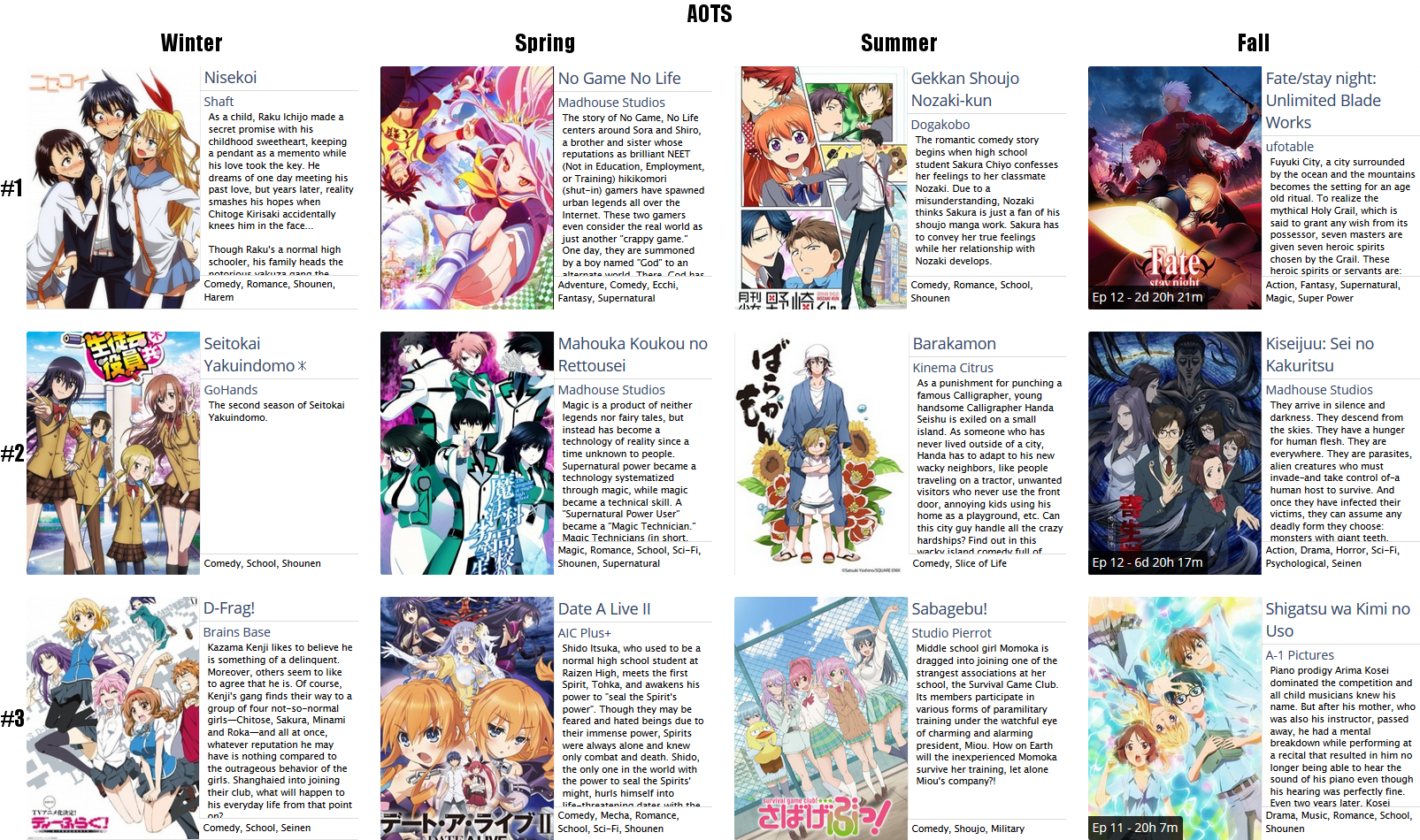 Odd thing I noticed, before each season I think "mhm, this season doesn't look too good", but 12 weeks later I'm always like "man this season was good", let's hope Winter Season '15 keeps it up with goodies like Durarara s2, Ansatsu Kyoushitsu, Death Parade and KanColle, and we also get Tsukimonogatari as New Years present

Recap of the last few weeks on the not-currently-airing anime side:

- Amagami SS (12/26): That's one way to do a VN-adaption I guess, it's watchable but nothing outstanding, so far the Sae-arc was my favorite

- AnoHana: Good show, took a bit of buildup but the ending still managed to hit the feels

- Date A Live: Encore OVA: Fun episode with Kurumi, but the subs were incredibly shit in the version I watched >_>

- Denpa Teki na Kanojo: It was... odd? Didn't quite get what the whole point of it was, but kinda interesting to watch at least, might have to check out source material to clear up some confusion

- Kamisama Hajimemashita: Well... supernatural shoujo romance show, don't know why I decided to watch it really, comedy bits are okay but the shoujo stuff's... yea, bit too much sometimes

- Kamisama no Inai Nichiyoubi: Imho very original fantasy setting I'd like to see more of (*goes to read the novels*), separated into 4ep-long arcs, first 2 were the best since the ones after those felt kinda rushed, and I'm not sure about the ending

- Kamisama no Memochou: Detective-story with Yakuza, drug dealing, etc, had a certain Durarara-feeling to it and was more enjoyable than I'd expected

- Kobato.: Very good concept, decently executed, even though I had hoped for something... I dunno, something different, but I've been told that the anime was only loosely based on the manga, so I'll read that soon, we'll see

- Love Live!: Wanted an Idol-anime, got an Idol-anime, tho different from what I expected since I had only seen Idolm@ster before, I liked it tho and will watch the 2nd season soon, favorite song so far is No Brand Girls

- Mawaru Penguindrum (13/24): I'm not sure what's going on anymore but I quite like it, and Rock Over Japan is a really catchy song, damn you magical space penguin hat

Gonna watch the 2nd season and the movies

That's all I think, have an AMV