More evidence that Indoctrination played heavily into Bioware's intent with the ending. It is revealed here that they considered having Shepard essentially become Saren and another Specter face Shepard down. They don't mention Indoctrination outright, but it's clear the intent would be that Shepard had become indoctrinated the same way as Saren and Kaiden/Ashley would try and talk you down the same way Shepard talked Saren into killing himself.

"very, very early idea for Shepard" was that he would turn to Reaper technology to accomplish his goals and become something akin to Mass Effect 1 villain Saren.

In a cyclical twist and a mirror of the first game's Saren confrontation, Shepard would eventually have been confronted by the new human spectre (Ashley or Kaiden, depending on your Mass Effect 1 choice).

Sad to see Bioware became quite close to making a masterpiece but by slipping just one note, they tarnished their reputation.  And it doesn't make sense either.  They usually have a major twist at the end of each of their games but seemed to have lacked one here.

On another note and in case people don't remember, this wasn't the only content cut out from the game that featured Indoctrination.  There was another part where you had to resist Indoctrination that was cut out because of it's complex game mechanics.

They do have a major twist! They just decided to go the Blade Runner route and leave it for years of speculation rather than have the game tell you the twist outright.

All this evidence of Indoctrination based ending just show that they wrote the ending with Indoctrination in mind, not that it was cut. They just changed how they presented it. It's pretty obvious that it is still intended at the end of the game.

My God.  If they'd gone this route (and they were so freaking close!), it would have been so epic, so...poetic.

At the end Shepard succums to indoctrination as he enters the Citadel a la Frodo entering Mt. Doom.  He makes a choice, yet plays into the Catalyst's hand regardless.  Shepard is altered somehow depending on the choice that was made (Destroy, Control, Synthesis, Refuse).  Then he is confronted by his squad now led by HS2.

During ensuing conversation, the squad comes to realize that Shep is indoctrinated.  Once the cat is out of the bag, the player's conversation selections no longer dictate how Shepard responds, letting the player feel what it's like to lose control.

I can see it ending in one of three ways:

1)  The player fails to choose the correct responses that would lead Shepard out of indoctrination.  He fully succumbs and shoots HS2 dead.  The squad has no choice but to kill Shepard and continue the mission without his leadership.  The Reapers are defeated, but the lessened cohesion among the allied forces leads to enormous casualties and a hard road ahead for the survivors.

2)  The player chooses to attempt to sacrifice Shepard to save the others and is successful.  Shepard draws his weapon and points it at the HS2, grimaces, and puts it to his own head, smiling sadly before pulling the trigger.  The squad continues the mission under the leadership of HS2.  The Reapers are defeated, and the cohesion among the allies provided by the authority of a Spetre holds casualties to a level less than disastrous.  Civilizations of the galaxy will recover and one day thrive again.

3)  The player chooses to attempt to break Shepard out of the grip of indoctrination.  (Perhaps unavailable if player chose control or synthesis, but that would be pretty rough.)  With the help of the squad, LI, and HS2, he is able to recognize and overcome the commands of the Catalyst.  The squad continues the mission under the leadership of HS2 along with Shepard.  Shepard rallies the forces of the galaxy and defeats the Reapers.  Civilizations of the galaxy will recover more quickly and thrive in a new era of cooperation and peace.

Ok, I apologize for the mind dump, but it was in there and had to come out.  Quite a few problems with the idea, especially the seemingly innocuous phrase "The Reapers are defeated", but I think the setup for the final confrontation being between an indoctrinated Shepard versus his crew is far and away better than what we got in the form of Star kid in the literal interpretation.  Hearing that these ideas were presented in some form, and ultimately rejected by the writing team (or Hudson/Walters if that's the case) cripples my mind with spasms of incredulity. 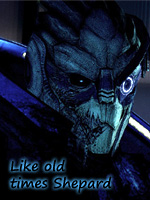 Similar topics
» SDCC 2011 Reveals
» 2012 April & May figure reveals from Power Con!
» Need Ideas for Belts and or Buckles.
» The Mystery of The Mass Transformations
» Ideas that will; blow your mind!